Reframe It Until You Make It!

Article
Tuesday, March 22, 2022
By David Steinberg
Photo by iStock/martin-dm
By using this six-step process, students can learn to reduce stress, cope with difficulty, and cultivate resilience in their academic and personal lives.

Students are having to cope with unprecedented levels of stress, not least because of the impact of the pandemic and their transition to online learning. But students have always had to deal with stressful situations, from large academic workloads and the quest for top marks to financial challenges and changes in their personal lives.

As educators, we tend to send students in distress to campus health centers for one-on-one counseling. But there is another way: Conduct a workshop where students can learn, from the facilitator and from one another, how to develop their personal resilience.

I have developed such a workshop for business management students at all levels. It offers students guidance on not only how they can better manage life’s challenges, but also how they can navigate the rigorous process of conducting research. The workshop’s design draws inspiration from several sources:

The workshop, which can be delivered online or face-to-face, is not intended to create a clinical setting or foster therapist-client engagements with students. Rather, it is designed to give students new ways to think about the obstacles they face in their research and lives.

One unique aspect of the workshop is that it integrates contemporary photorealistic and abstract paintings, along with modern photography. For students who have become weary of online lectures, this examination of artworks immerses students in image-rich and compelling individual and group exercises. It not only draws them into the session in a whole new way, but also engages visual learners.

After leading a discussion about stressors associated with being a student and conducting research, I introduce the constructs of self-efficacy and the social cognitive perspective on mindfulness. The students complete some warm-up exercises, and then the six-step process begins.

For the first step, I present students with two images featuring people with ambiguous expressions. The first is a painting by Nick Alm that depicts a woman with her eyes closed walking through a café. The second is a painting by Joe Simpson that shows a young man in New York City’s Times Square as he looks down at a piece of paper in his hands.

Students then are asked to interpret the emotional states of the two subjects based on their expressions. In the past, students have said that Alm’s subject has just “broken up with a lover” and that Simpson’s has “received a poor mark on an assignment.”

In Step 2, students are asked to reinterpret the mood states of both subjects in a way that emphasizes new possibilities and opportunities. Here the magic begins. Through a technique called “cognitive modification,” students change their view of what each artwork represents. According to a study by Falk Leichsenring, a professor of psychotherapy research at the University of Giessen in Germany, and his colleagues, cognitive modification is defined as “techniques such as establishing guiding self-statements or verbal self-instructions.”

After students adjust their self-instruction to accommodate more positive interpretations, they might say that the woman in Alm’s painting has “just received a proposal of marriage” or that Simpson’s subject has received “news that a loved one is out of surgery and doing well.”

Next, students can test their interpreting/reinterpreting skills during a discussion of an enhanced photo by Nicholas Max. In the photo, a young woman stands on a railroad track looking at a tornado in the distance. Students are asked to imagine what their mood state would be if they were the woman in the photo. (It is important to note that I do not share the title of this photo, which has a negative connotation, to avoid undermining students’ ability to view its content in a more positive light.)

Students’ responses tend to include phrases such as the “scariest moment of my life” or “paralyzed with fear.” But when asked to reinterpret, one brave student might speak of “being curious” or “feeling free and bold.”

When this happens, I usually engage with this student further, allowing the rest of the students to hear our dialogue. The student and I might point out aspects of the image that could be interpreted more positively—for instance, the sun appears to be emerging from the scene and the tornado could be moving away from the woman. We also might note that the tracks bend left at a sharp angle, suggesting that an oncoming train would be moving slowly, allowing plenty of time for the woman to step off the tracks to safety.

For this step, I introduce elements of the Stanford d.school design thinking process, starting with problem framing and reframing. Students are shown three photorealistic paintings by Nigel Cox. Each of these paintings features a young person in the foreground and different faint images in the background, including the virus that causes COVID-19, bull elephants, and satellite dishes.

Students are asked to frame the problem posed in the paintings. In the first round, their responses might include, respectively, “the ongoing pandemic,” “the extinction of species,” and “the rise of automation/artificial intelligence.”

In Step 4, students are asked to change the context—or reframe the problem—of the images depicted in each of Cox’s works. This time, students tend to make positive comments such as “the speed of releasing vaccines to the masses,” “humans combating poaching,” or “the positive aspects of social media.” Reframing is a pivotal step, because it encourages students to think outside their current constraints with fresh perspectives.

At this point, students have now framed and reframed their perspectives several times. The practice has helped them develop a form of what Bandura calls “mastery experience” (also known as “performance accomplishment”). Mastery experience is one of Bandura’s four sources of self-efficacy, along with vicarious experience, social persuasion, and physiological and emotional states. According to Bandura in his 1997 book Self-Efficacy: The Exercise of Control, mastery experience is the most powerful way that students can develop their own self-efficacy. It allows them to build self-confidence based on their successes and develop the belief that they can overcome challenges through perseverance. 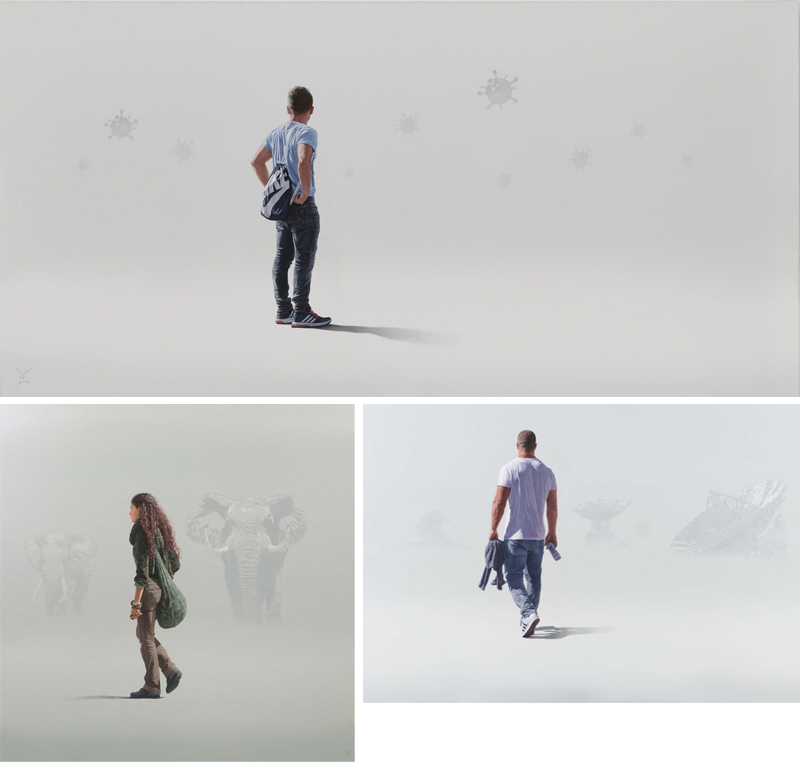 Paintings by Nigel Cox, clockwise from top: The Game Changer, The Silent Array, and Extinction III

In the next-to-last step, I bring additional elements of the d.school design thinking process into the mix. First, I ask students to practice ideation by interpreting a painting by Mary Iverson. In the artwork, a snow-covered mountain scene with a superimposed image of a fractured container ship spilling its cargo onto the slope.

Through this ideation exercise, students are encouraged to interpret the problem suggested in the painting and provide solutions. Naturally, their responses revolve around problems such as climate change and pollution, and they propose solutions ranging from reducing our use of carbon-based fuels to removing plastics from the oceans to cleaning the air we breathe.

Finally, I ask students to test solutions associated with a research problem by looking at the problem in a new way. I ask them to consider this scenario: They have asked startup founders to complete a structured questionnaire, but their survey produced initial results that are too one-dimensional to offer useful insights into the entrepreneur’s experience. To deepen their understanding, they must adopt this solution: Conduct ethnographic research in which they immerse themselves in the world of the entrepreneur, much like anthropologists might immerse themselves in a tribal culture.

Before they begin, I ask them to consider the words of Derek Lidow, a professor of the practice at Princeton University in New Jersey. Lidow notes that “to really understand how businesses are created will require a multitude of ethnographic studies of entrepreneurs working with their teams, suppliers, customers, investors, regulators, and others, from the time their first desires to start a new business are manifest through to the time that their businesses have become self-sustaining, have been sold, or have been closed.”

I then ask students how they would conduct ethnographic research in a foreign city. To explore that question, students gaze at a remarkably detailed painting by Nathan Walsh of the New York City skyline.

Walsh’s painting immerses students in the complexity and interactivity of a large urban setting. This puts them in the right frame of mind to consider Lidow’s comment and to visualize how they would bring to life the diverse relationships between entrepreneurs and their many stakeholders.

Putting It All Together

For the final exercise of the workshop, I ask students to tie the six-step process together, as they consider what they would do in a new scenario. For each scenario, which I choose based on the students’ educational level, I present a different image to set the tone for the exercise.

For example, I ask undergraduates to work through a scenario called Dysfunctional Project Team. In it, they imagine what they would do if they were working on a group project in which some of their team members have disengaged. To provide a fitting discordant background for this scenario, I present Robert Proch’s painting of a vehicle accelerating away from a group of people while coming apart and spilling its contents everywhere.

Postgraduates and doctoral students work on two other scenarios. In the first, called Can’t Gather the Data, students imagine what they would do if they posted a survey on social media but had not received a single response after several weeks. Darryll Schiff’s time-lapse image of people walking down a city sidewalk adds to the tension.

The second, more challenging scenario is called Enigmatic Supervisor. Students must imagine ways to connect with a research supervisor whose feedback on a draft literature review is difficult to interpret. The supervisor is hard to track down, and to make matters worse, will soon be moving overseas for a year to work on a research project. Henrik Hansen’s photo of a forest scene shrouded in fog sets the right mood for this exercise.

No matter how prepared students are, they will face difficulties in their lives. This six-step process empowers students not only to overcome the challenges they face, but to view them in a more positive light. When students remind themselves to “reinterpret the mood” and “reframe the problem,” they realize that they can indeed come up with solutions.

Article
August 15, 2022
Sustainable Leadership: The Rainforest Perspective
Through an immersion in the Amazon ecosystem, students learn the connection between sustainability and leadership.

Article
August 1, 2022
9 Principles of Persuasion for the 21st Century
When students learn these universal principles, they will be prepared to exert more influence on others, whether in their lives or at work.