Article
Wednesday, March 24, 2021
By Stefano Mastrogiacomo
Photo by iStock/alphaspirit
The future of work is likely to be driven by teams—here’s what business graduates need to know to collaborate successfully.

When it comes to learning about team-based communication, business students and their instructors deserve to have access to all the latest methodologies and best practices. I have found, however, that some instructors focus primarily on the processes involved in building strong teams; others focus on team psychology.

As a result, there’s a risk that students will become business leaders who see only one side of building effective teams. I’ve seen, for example, business leaders who prioritize improving large-scale, high-impact management processes, while paying too little attention to the small, daily interactions that happen as teams distribute their work and integrate their individual output into a whole. When teams underperform or fail, it is often because of this leadership blind spot.

If today’s business professionals are going to build effective teams, they need to understand how to navigate all of the complexity and uncertainty that drive real-world group dynamics.

I recently explored the fundamentals of team communication and coordination in a book I wrote with my colleague Alex Osterwalder, entrepreneur and developer of the Business Model Canvas. Over 20 years, we observed the dynamics of hundreds of teams, and we analyzed the research findings by scholars from diverse fields, including psychology, psycholinguistics, psychological anthropology, information systems, leadership, and management.

Based on that interdisciplinary knowledge, we have created tools that we believe will help leaders overcome their blind spots and build more effective teams. Two tools that we find especially important are the Team Contract and the Team Alignment Map, which are designed to help teams complete three important steps for successful collaboration: setting ground rules for their interactions, aligning their individual efforts, and assessing whether they are collaborating effectively.

Agreement—Is It Safe to Speak Up?

Before teams start their work in earnest, we advise participants to establish a team contract—a document that sets the guidelines for their future interactions. Team members should work together to answer two questions:

1. What are the rules and behaviors that we want to abide by in our team?

2. As individuals, do we have preferences for working in a certain way?

To help teams visualize the terms of their contracts, we created the Team Contract tool below. It’s a simple way for team members to create a clear, collective representation of acceptable (“In”) and unacceptable (“Out”) behaviors:

By establishing such a contract, team members set clear, commonly agreed-upon rules that will help them align their actions and behaviors. This alignment is an essential first step to effective collaboration—especially in cross-functional groups where each person may bring different expectations and ways of working. This is also true for diverse teams, which can be as much a source of friction as they are a source of creativity.

Even more important, contracts can help teams cultivate a sense of psychological safety, which will empower team members to take risks, speak up, and share knowledge. When people feel safe, they also will be more likely to engage in collaborative learning processes that will help them become more innovative and solve more complex problems.

Silence has a negative impact on innovation and productivity. People who are not sharing ideas are creating only the illusion of a team.

If teams skip this exercise, people are more likely to presuppose that their own individual—and unspoken—versions of team rules align with those of other group members. This can trigger a series of negative events. When team members aren’t on the same page, they are less likely to trust each other. If they do not trust each other, they will be afraid to speak up. If they don’t speak up, they will not share key information. And if they do not share key information, they will not come to a collective understanding, engage in collective learning, or cultivate collective intelligence.

Such silence has a direct and negative impact on innovation and productivity, as people try to solve complex problems as individuals who are working around each other and not with each other. People who are not sharing ideas are creating only the illusion of a team.

The second tool we have devised is the Team Alignment Map. Teams participate in a short “alignment session,” during which they discuss and fill out the map together. This will help ensure that everyone understands and trusts each other enough to accomplish their objectives piecemeal.

Presented in the form of a poster, the map, shown below, includes four columns: 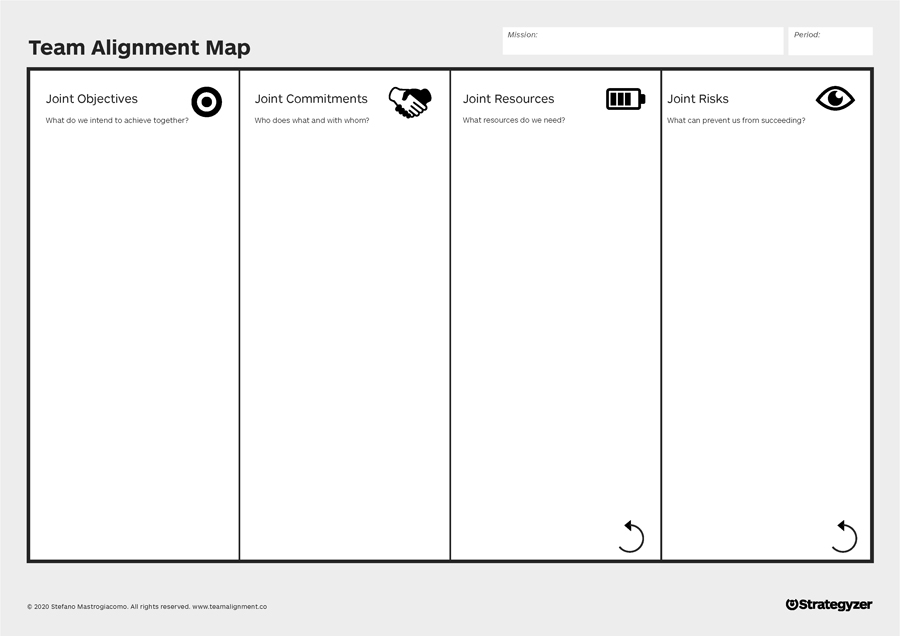 In each column, teams come up with collective answers to what we call a “trigger question” related to one aspect of the project:

1. Joint objectives: What do we intend to achieve together?

2. Joint commitments: Who will do what (and for whom)?

3. Joint resources: What resources do we need to do our parts?

As they work through each question, team members share their answers on a poster or digital whiteboard. This step increases their mutual awareness of what the work entails and what each person will need to do for the team to succeed, boosting team alignment before the work begins.

Perhaps more important, this is the stage where they anticipate and address potential risks and challenges. This is a vital step that will help reduce the coordination problems that often undermine projects during the execution phases.

Assessment—Are We on the Right Path?

After establishing a team contract and mapping out a plan, effective teams also build in a system of assessment—an alert system that will warn them if they have strayed from their project’s desired trajectory. Assessments are typically performed at the beginning of projects to validate the initial alignment and officially kick off the project. They also can be performed by request, if team members express confusion about task assignments, deliverable deadlines, or other aspects of the collaboration.

To support this step, teams can assign one of three potential values to the content of each column of the Team Alignment Map:

Team members can share which value they would assign to that aspect of the project. Depending on what the team decides, people can share their assessments on paper or digitally—or, if necessary, anonymously. But the votes themselves are displayed visually, online or on a whiteboard, so that the team has a full picture of where they stand.

The greater the perception gaps among team members, the more projects are in danger. At this point, it is imperative that teams engage in rapid “Repair” discussions to put their projects back on track.

1. Reveal—Team members share their individual perceptions of the work they and their teammates are doing.

2. Reflect—They discuss what seems to be right and wrong.

3. Repair—They correct perceptions and processes where there is misalignment.

If the team has done its work well, everyone’s votes during the “Reveal” step might be largely in sync, indicating team alignment. However, Person A might vote that the team’s joint objectives are clear, while Person B might vote that they are unclear. Someone might think the team has anticipated risks under control, while someone else might see cause for concern. The greater these perception gaps, the more projects are in danger. At this point, it is imperative that teams engage in rapid “Repair” discussions to put their projects back on track.

These quick Reveal-Reflect-Repair discussions prevent team members from accumulating hidden perception gaps. Teams who check in with each other regularly to assess their progress will prevent these gaps from turning into big problems later on.

Collaboration, the Most Critical Skill

In 2012, IBM surveyed 1,700 CEOs and senior public sector leaders from around the world. At that time, respondents indicated collaboration was the No. 1 trait CEOs sought in their employees. In fact, 75 percent of CEOs called it critical to their organizations. Now, nearly a decade later, companies are engaging in more virtual collaboration, which has made team-based skills such as communication, coordination, and collaboration more critical than ever.

Today’s business students must realize that they will be responsible for creating a healthy climate for productive collaboration in the workplace. If schools equip them with the right collaborative leadership tools, they will be poised to build the teams that companies will need in the years to come.

Mastrogiacomo is the co-author of the book High-Impact Tools for Teams.

Authors
Stefano Mastrogiacomo
Founder, The Team Alignment Co.
Article Tags
Advertise With Us
Subscribe to LINK, AACSB's weekly newsletter!
AACSB LINK—Leading Insights, News, and Knowledge—is an email newsletter that brings members and subscribers the newest, most relevant information in global business education.
Insights You Might Like
Embrace Change, Prioritize People
These are two of the most valuable lessons to arise from the pandemic, and they’re the focus of executive education programs at ESCP Business School.

Article
August 17, 2022
Donor Engagement During Difficult Times
To achieve our initiatives, even in a volatile economic environment, we must redouble our efforts to involve donors in our students’ successes.

Article
August 16, 2022
Followers First
Is higher education doing a disservice to students by making them leaders before they become good followers?