AACSB Quick-Take Survey on COVID-19: B-Schools Together in the Pandemic—Differently

Business schools around the world continue to grapple with the new realities emerging almost daily as a result of COVID-19. As social distancing becomes the norm, schools have moved operations and teaching online. Just like across many, if not all, industries, financial impacts are on the mind of business school leaders. AACSB Business Education Intelligence continued its quick-take survey series focused on COVID-19 impacts on business schools to learn what actions are being taken.

It is a virtual education world at the moment. AACSB’s second quick-take survey on COVID-19 impacts to member business schools worldwide reveals that 99 percent of schools have moved at least some coursework online. Ninety-four percent of business schools have moved more than three-quarters of their existing courses online, with 80 percent achieving 100 percent online delivery in a matter of weeks. The survey reflects responses from more than 300 business schools globally: 161 from the Americas; 62 from Asia Pacific; and 84 from Europe, the Middle East, and Asia (EMEA). 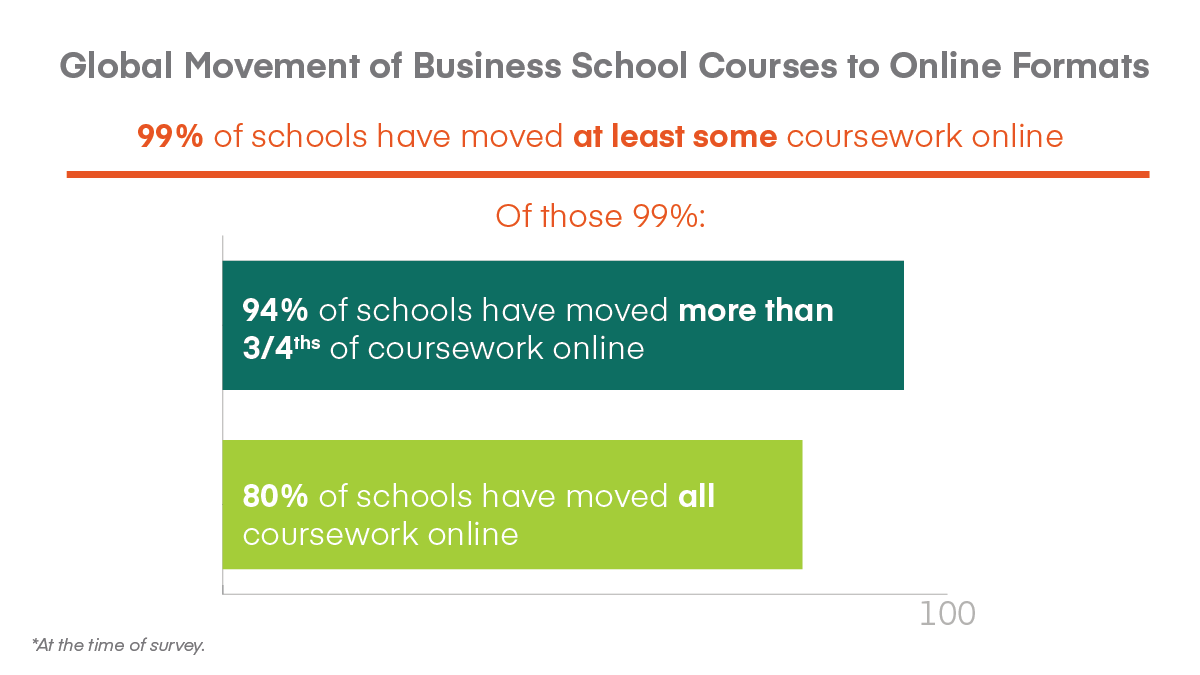 If anyone is on campus, it’s most likely those providing technology support (nearly 50 percent of schools say this service remains operational on campus at some level). Just under a third of the global network is keeping campus administrative offices operational, with schools in Asia and the Middle East reflecting the highest rates at nearly 50 percent.

The conversion to online courses has been enabled by the mass mobilization of faculty to convert their classrooms to virtual ones. Globally, 92 percent of administrators strongly or somewhat agree that their faculty have been willing and able to transition their courses online. Strong agreement on this point was reflected by 73 percent of schools in EMEA, 57 percent in the Americas, and 49 percent in Asia Pacific.

Just 8 percent of schools reported challenges related to unclear or conflicting expectations of faculty—the lowest by far among a series of challenges faced by schools in this transition. A third of business school administrators indicated a lack of faculty comfort with online tools as one of their three leading challenges to overcome.

Perspectives on whether schools have adequate staff support for transitioning online lags slightly behind views about faculty’s willingness to transition, but are still positive. Globally, 85 percent of business school administrators strongly or somewhat agree that they have the staff support required to facilitate online course conversions. Strong agreement on this point was reflected by 56 percent of schools in EMEA, 42 percent in the Americas, and 51 percent in Asia Pacific.

Just over half of schools (55 percent) strongly agree that they had the adequate technology resources (software, licensing, etc.) in place to support the online conversion, with another 35 percent saying they “somewhat agree.”

As for students, just 24 percent of business school leaders strongly agree that students have transitioned comfortably to the online format, with the majority (58 percent) saying they somewhat agree. Business schools in EMEA were most likely (43 percent) to strongly agree. 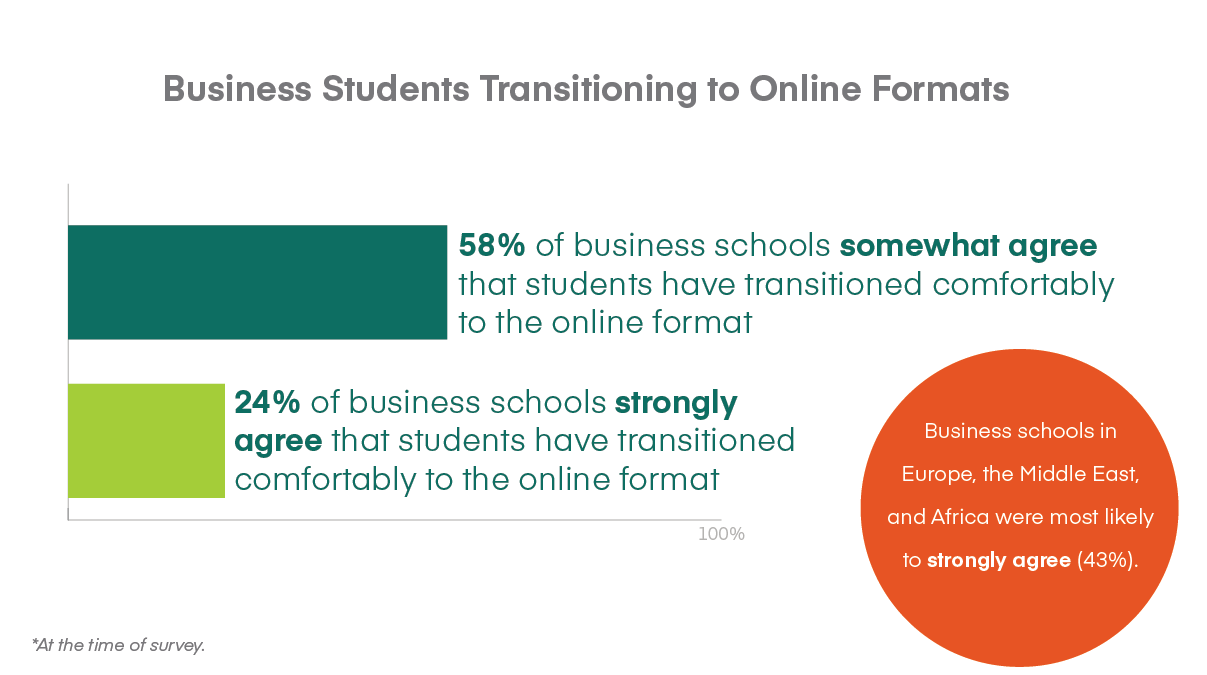 Administrators were generally more likely to agree that their faculty were willing and able to transition online than to agree that students had transitioned comfortably, which suggests that challenges still existed in ensuring an optimal virtual experience despite technically successful transition. Student comfort with online tools was cited as a top challenge by less than one in five schools, compared to the earlier cited one-third of schools reporting faculty comfort with online tools as a challenge. Ranking at the same level or higher are challenges related to implementing experiential learning alternatives online (40 percent), and content adaptation (32 percent). Newly introduced connectivity or technology challenges (34 percent) and work-life balance concerns (33 percent) are also prevalent.

These and other concerns have contributed to decisions at 35 percent of schools (predominantly in the U.S. and Canada) to shift some previously graded courses to a pass/fail option.

Asked about best practices, common themes from respondents include support for faculty mentoring and peer-to-peer networking to connect those with more experience delivering content online with those suddenly adapting. Multiple schools reported instituting a “buddy” or “back-up” system among faculty, so that for each course a second faculty member would be sufficiently familiar with the material and where to access it, so they could step in and support the class if the primary faculty member were to fall ill.

While overall there are similarities in the ways schools have perceived their online transitions, the broader financial impacts of COVID-19 are being experienced very differently. Location, student population, and program mix are all factors leading to unevenness in the anticipated severity of financial impacts on the business school’s operations.

Globally, 60 percent of schools expect reduced student enrollment or intake to have a significant impact on their operating budget and financial strategies. This concern is most widespread among respondents from Oceania (94 percent) and least widespread among schools in Asia (38 percent), the Middle East (29 percent), and Africa (25 percent). A much smaller proportion expect impacts from reducing tuition rates—most prevalent in Oceania and Latin America at just under a third of respondents in each region. 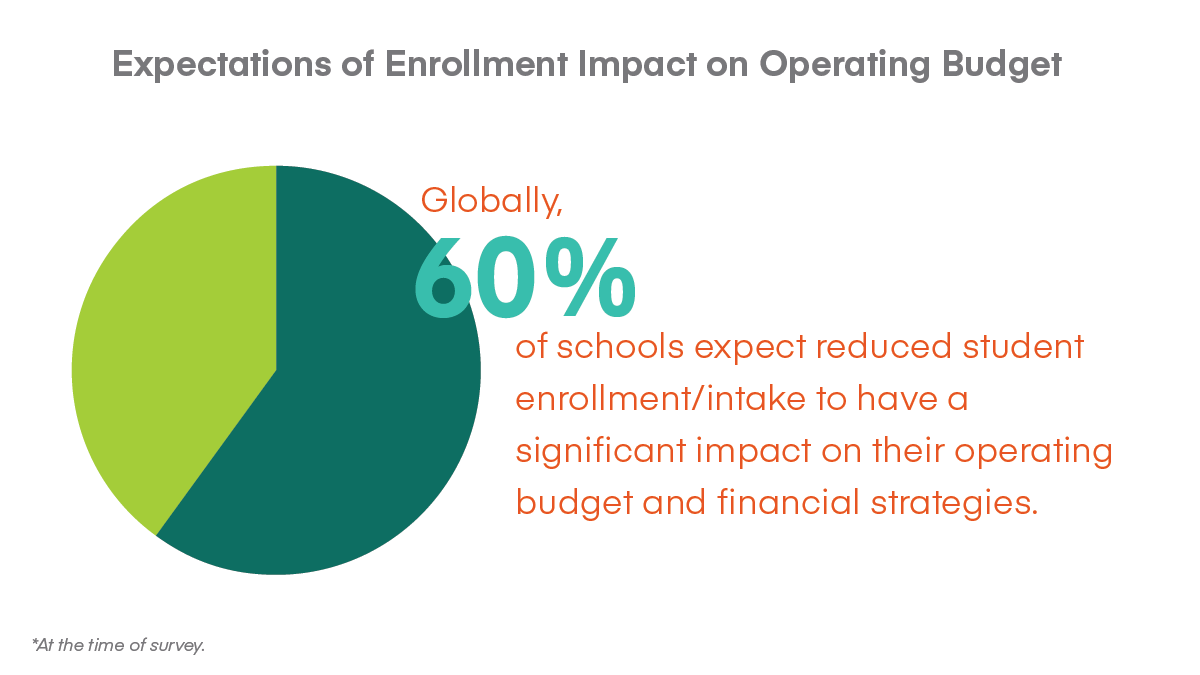 Forty-two percent of schools expect a significant impact from reduced fundraising revenue. Regions where this concern is more widespread include the U.S. (64 percent) and Canada (43 percent), as well as among the small and dispersed set of responding schools from Africa.

Approximately a third (34 percent) expect lost executive education revenue to be a significant impact. Canadian and Latin American schools were the most likely to share this concern (86 percent in each region). Across other regions, the lower proportion of schools reporting this as a concern masks the significance of the impact expected by individual schools that have large executive education portfolios. 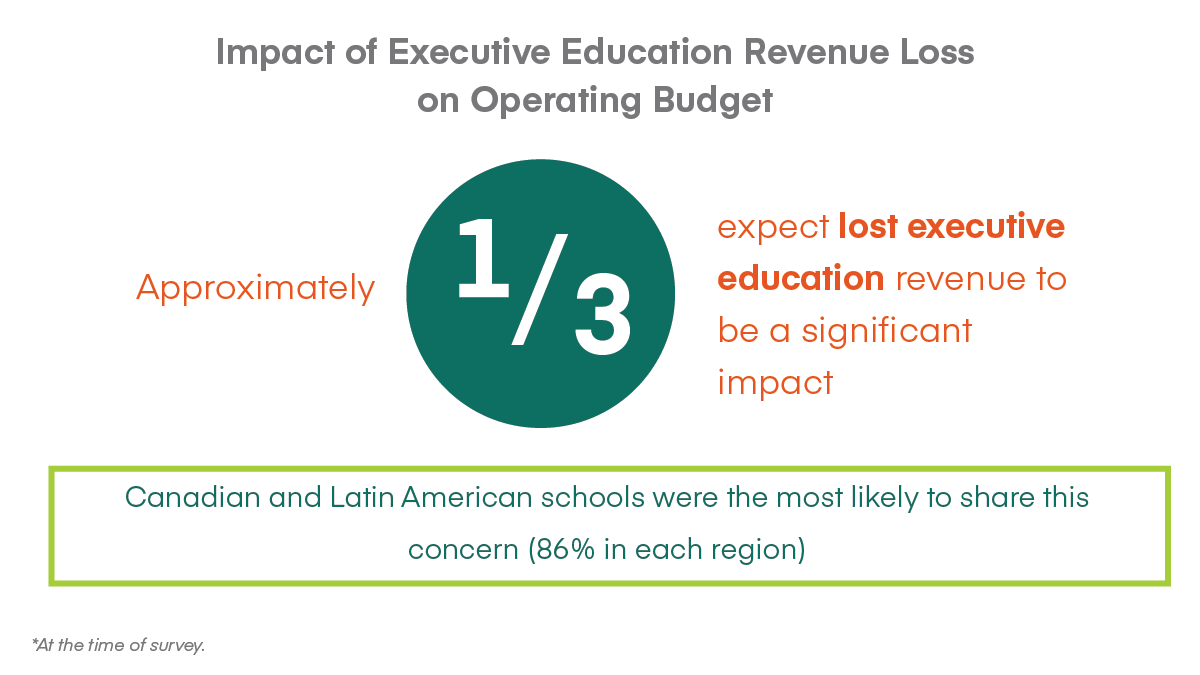 In the U.S., impacts related to changes in schools’ resource allocation from or contribution to university operations loom heavy (at 60 percent), as universities grapple with broader enrollment concerns, refunded room and board fees, and the prospect of reduced government (state) funding. U.S. schools also are unique globally in anticipating significant impacts to endowments (43 percent).

On the expense side, payroll reductions or eliminations are expected to make a significant impact at 19 percent of business schools globally. A broader 42 percent of schools have implemented hiring freezes (with varying levels of significance to the impact). Other personnel-related impacts include freezes on faculty and staff promotions at 11 percent of schools, and a small number of schools (6 percent) anticipating personnel reductions.

Other expense impacts include increased costs to implement campus sanitation measures (most prevalent in Asia where more than half of schools reported this concern as significant), and general attention to cost-cutting. Responses from individual schools reported experiencing cuts ranging from 1 percent to 50 percent of their operating budgets. Many alluded to reallocations of expenses and taking advantage of cost savings from travel restrictions and other canceled activities.

When asked to share their most pressing question, 25 percent of respondents asked questions related to planning amid a very uncertain future near-term. A further 23 percent of schools had questions about how they would anticipate and manage impacts on enrollments—including, for some, the net combined effect of an economic downturn (that in previous instances has driven more individuals back to business school) and a pandemic that radically disrupts the way working, living, and learning are taking place. Our next quick-take survey will go deeper into the recruitment, admissions, and enrollment impacts among AACSB’s global membership.

Article
January 25, 2022
5 Business Education Trends to Watch in 2022
After nearly two years of crisis adaptation, business schools are finding their way to a new, positive future for business education.

Article
January 25, 2022
Why One Business School Focuses on Global Health
University College London has opened a school to address the current and future health crises that will have devastating effects on the world.