Tampa, Fla., USA (November 28, 2022) – AACSB International (AACSB) announces today that Tim Mescon, executive vice president and chief officer of Europe, the Middle East, and Africa, is retiring on December 31, 2022. Mescon has been part of AACSB since January 2015, when he helped establish and open the AACSB EMEA office in Amsterdam, the Netherlands.

“It has been an honor to support AACSB’s mission and vision in EMEA—and globally—and to serve the members of our business education community,” said Mescon. “I truly believe that business education will create a positive impact in society. I look forward to AACSB’s continued growth and impact around the world.” 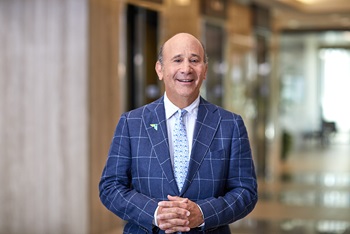 Over the past eight years, Mescon expanded AACSB’s visibility and impact in EMEA as he passionately promoted the value of business education and AACSB accreditation through thought leadership, spokesperson interviews, and advisory roles. Under his leadership in the region, the number of AACSB-accredited schools doubled to 189; membership grew by nearly 60 percent, to 542; and learning and development offerings grew from six to nearly 40 events annually.

In 2016, Mescon launched the Global Improvement Network to support and guide business schools in Africa as they worked to cultivate local leaders for emerging countries. Mescon, with his EMEA colleagues, served as a liaison with governments to establish cooperative agreements with the Accreditation Organization of the Netherlands and Flanders, the United Arab Emirates Commission for Academic Accreditation, the Council of Higher Education in Turkey, and the Association of Arab Universities, among others. During his tenure, Mescon released his fifth book, a co-edited work titled Technologies, Artificial Intelligence and the Future of Learning Post-COVID-19: The Crucial Role of International Accreditation. Mescon was named a fellow of the Chartered Association of Business Schools in the U.K.

"I’ve had the pleasure of knowing and working with Tim for many years, before either of us worked together at AACSB,” said Caryn Beck-Dudley, president and CEO of AACSB. “Throughout that time, I’ve seen him dedicate his life to making business education a force for good, not only through his academic and advisory roles, but through his leadership and commitment to AACSB. His outreach efforts to schools, businesses, and governments have helped shape the future of business education in EMEA.”

Ron Tuninga was recently named AACSB’s vice president and managing director of EMEA and began his role on November 15. An innovative leader with global experience in the public and private higher education sectors, Tuninga will build on the foundational work Mescon has achieved in the region.

News You Might Like
AACSB Announces 2023 Class of Influential Leaders
The eighth annual initiative recognizes 25 societal impact leaders from AACSB-accredited institutions.
Press Releases
February 6, 2023
Confirming Global Quality and Distinction in Business Education
AACSB announces that 45 business schools have extended their global accreditation in business, nine have extended their global accreditation in accounting, and one business school has achieved initial accounting accreditation.
Press Releases
January 26, 2023
AACSB President and CEO Search Update
The AACSB Board of Directors chairs and the Executive Committee have assembled a search committee consisting of nine board members and one Executive Team member to recruit AACSB’s next president and CEO.
Press Releases
December 15, 2022