When a school has multiple locations, sometimes students and professors who are geographically distant don’t feel a strong sense of connection with each other. In 2018, NEOMA Business School set out to address that issue by creating the Digital Transformation Department. The goal was to design an online space that would encourage a sense of belonging among students and faculty at its three physical campuses in Reims, Rouen, and Paris, France.

“We benchmarked and tested various technologies to find something efficient and inclusive enough to set up a whole campus for more than 9,000 students, staff, and faculty members,” says Alain Goudey, director of digital transformation and professor of marketing at the school. “Of course, the pandemic accelerated the process!”

The school ultimately decided to create a “persistent virtual campus” where professors, staff, and students could share the same sorts of spaces they share in real life as they teach, learn, collaborate, and socialize. The site was launched in September 2020 in Laval Virtual World and quickly became NEOMA’s fourth campus. Goudey discussed how the virtual campus came about in a submission he made to AACSB’s 2021 Innovations That Inspire initiative.

NEOMA already had some experience with virtual reality because several years ago it had used VR to launch one of the first business case studies using this tech. Through that process, school officials met members of Laval Virtual, a French association dedicated to immersive technology for startups and researchers. In 2020, as COVID-19 swept around the world, Goudey and his team worked with Laval to create NEOMA’s digital campus.

The space consists of a virtual 10,000-square-meter (32,808-square-foot) “building” holding common areas, classrooms, amphitheaters, meeting rooms, and offices. Students can access the building from anywhere in the world using nothing more sophisticated than a traditional laptop. (They can’t join the app with a tablet or smartphone.) Students who have VR headsets connected to their computers can experience the campus in a fully immersive environment.

To participate in the application, students first create their avatars, which they control with their mouses or keyboards. While interacting via avatar is just as remote as interacting via video conference, Goudey believes users find it more engaging—in large part because avatars operate on the principles of “embodied cognition and extended-self theory.”

NEOMA’s digital campus consists of a virtual “building” holding common areas, classrooms, amphitheaters, meeting rooms, and offices. Students can access it from anywhere in the world.

Goudey says, “The embodied cognition theory explains that all our cognitions rely on the senses and the body. This means that learning, which is a cognitive process, is linked to perceptions of bodies and the environment. Extended-self theory means that digital tools—such as smartphones, robots, and avatars—can be considered ‘real’ extensions of ourselves. Interacting by avatar provides people with a huge new experience of remote interactions, which creates positive emotions.”

Once they’ve created their avatars, participants can enter the building, walk down hallways, open and close doors, raise their hands, ask questions, leave notes, shake hands with other avatars, and express basic emotions. Just as in real life, they can cluster in large and small spaces designed for different functions. Hundreds can gather in an auditorium, or two can sit at a private table, and they can choose to communicate either by voice or text-based chat.

“What I really like is that the voice is spatialized, so if you are near someone, that person is loud, and when you’re more distant, the volume decreases,” says Goudey. “That means other people can hear you and join in. If you want to have a private discussion, you need to ‘sit down’ around a table in a blue circle, which constitutes a private volume.”

To work on projects together, individuals can exchange Post-it notes within the platform, use collaborative web-based tools available through the many screens within the virtual campus, and even share videos. “It’s easy to share information and ideas and organize them as you want,” says Goudey. “It’s really as if you were in a physical area.”

Avatars also can attend virtual classes, where professors and students can speak as they would in person. Students can listen to presentations or go to the board to share their ideas; professors can lecture to attendees or preside over class discussions.

“Professors also can augment their pedagogy with web-based applications, because each virtual screen of the virtual campus acts as a web browser,” says Goudey. “Moreover, it is really easy for a professor to deliver a briefing to the class in one amphitheater, then dispatch students to various rooms so they can work in teams before they come back to the classroom.”

Faculty can even teach classes in a hybrid format. As the picture below illustrates, a professor can be standing in an actual classroom addressing in-person students, while also being logged into the virtual campus on a screen that is visible to students watching via the app. 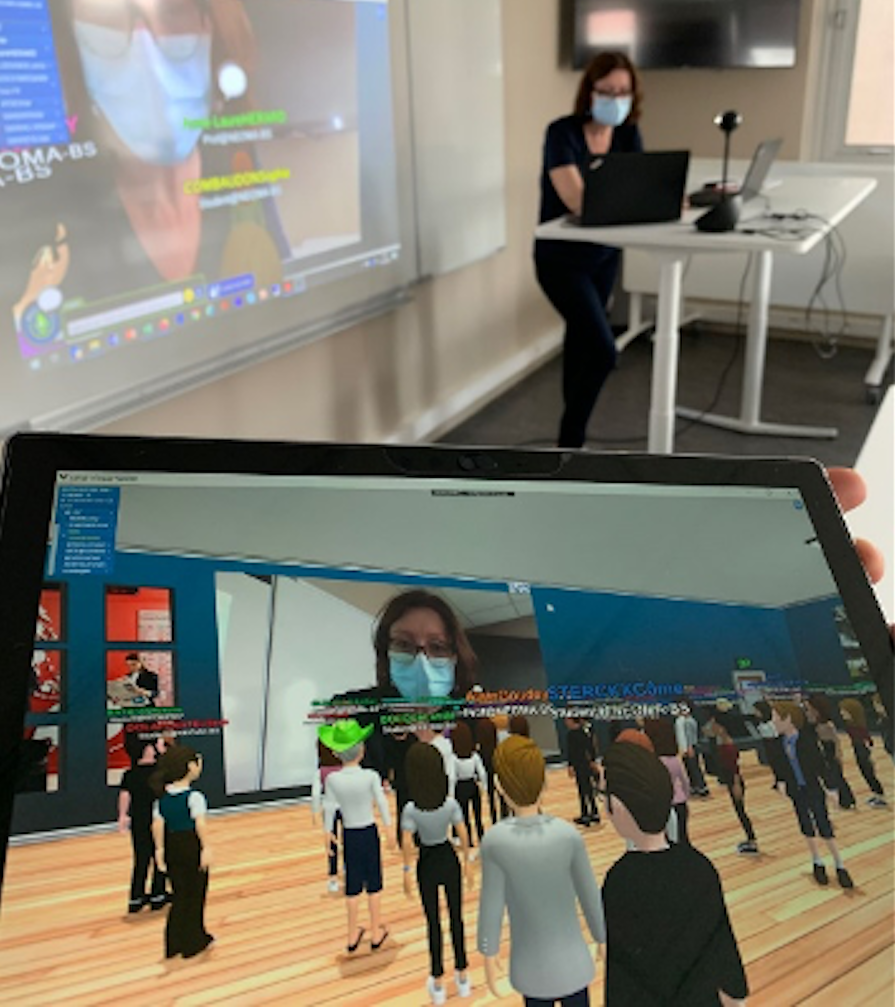 A professor delivers a lecture that students can attend in-person or by accessing NEOMA’s virtual campus.

While the technology certainly looks impressive, it is not all that difficult to master, according to Goudey. Attendees need only a few minutes of instruction to learn how to navigate the space. Even so, the school has recruited a “virtual campus manager” to accompany students, guiding them through the environment and serving as a help desk when needed.

Interacting in the digital space is more complicated for professors and presenters, so the school has created tutorials and training sessions to prep them. “We have also involved our pedagogical engineer to help faculty members reinvent and redesign their classes for avatars,” Goudey adds. “For big events, we have a team of experts who can be with the professor during the whole activity to provide live support.”

Creating the training and support materials was critical because Goudey believes NEOMA is one of the first business schools to roll out such a large virtual learning environment. “Everything needed to be created from scratch—even if we did benefit from the literature on what happened on Second Life a decade before,” he says.

The efforts have paid off. Over the past 10 months, thousands of students have used the persistent virtual campus to attend conferences, concerts, classes, seminars, working sessions, and meetings. So far, only a few alumni have been brought into the virtual campus, usually when they were invited as speakers, but Goudey sees that as a potential area of growth.

The longer the campus has been in use, the more it has evolved. “For instance, we expanded the number of spaces available so we had enough rooms to organize many kinds of events, sometimes in parallel,” says Goudey. “We also had to find technical solutions to run live concerts, redesign spaces, manage the access rights, and so on.”

Over the past 10 months, thousands of students have used NEOMA’s persistent virtual campus to attend conferences, concerts, classes, seminars, working sessions, and meetings.

The campus probably will continue to evolve as the school keeps it active even after the pandemic ends. “In any situation where we need to gather people in the same space at the same time, in an informal and innovative way, the virtual campus will be an interesting choice,” says Goudey.

In fact, some events will only be offered over the app. For instance, the school has instituted Digital Thursdays, where people gather for a variety of activities, such as presentations from partner companies or performances by avatar-based bands.

“Technology is one part of the story, and the way you use it is the other part,” says Goudey. “We’ve used the virtual campus for activities such as team meetings, team-building activities, concerts, and live showcases. We now have a great deal of experience managing virtual events for hundreds of people simultaneously.”

What the Future Holds

As with any type of digital transformation project, Goudey says, success has been contingent upon NEOMA’s willingness to “climb fast up the curve of experience.” He adds, “We have implemented a ‘test and learn’ culture that allows us to try many things as long as we measure what happens. In this case, we were able to scale the project very fast to our entire community, but thanks to our smaller trials, we had clear ideas on what we could or could not expect from the technology.”

Response from users has been enthusiastic, with 87 percent of students surveyed describing the virtual experience as good or better. One called it “a dream,” and another “loved every second.” Says Goudey, “Our community appropriated this tool very fast, eagerly responding with ideas and enhancements to enable the app to better serve the students and their learning experience.”

Partner organizations also were intrigued, and several have contacted NEOMA to discuss how they might adopt virtual environments. “Our students will be both pioneers and experts in remote working,” says Goudey. “Through this experience, they will be able to challenge the business world and shape a future where technology brings people together to learn and work in new ways. This virtual campus demonstrates how innovation is a game-changer in higher education.”

Authors
Sharon Shinn
Editor, AACSB Insights
Article Tags
advertisement
advertisement
Advertise With Us
Subscribe to LINK, AACSB's weekly newsletter!
AACSB LINK—Leading Insights, News, and Knowledge—is an email newsletter that brings members and subscribers the newest, most relevant information in global business education.
Insights You Might Like
Are Attitudes Changing Toward Online Learning?
Recent data could represent an inflection point in the way students and employers perceive the benefits of online education.

Article
January 26, 2022
Research Roundup: January 2022
Studies explore how to overcome vaccine hesitancy, why higher ed partnerships are key to SDG success, and how to choose the right data management software.