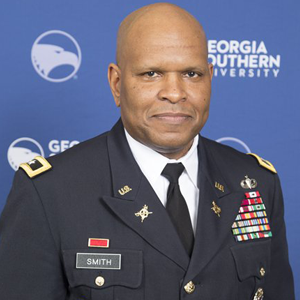 Whether through creative partnerships with major sports teams such as the St. Louis Rams and the St. Louis Cardinals or mentoring at his alma mater, Lieutenant General Leslie Smith helps those under his command cultivate a team mindset and strengthen community relationships.

A team-builder, complex problem-solver and mentor, U.S. Army Lieutenant General Leslie Smith uses his military training and business sensibilities to reinvest in the next generation of the armed forces. His military career began when he was commissioned from Georgia Southern University (GSU) in 1983 as a field artillery officer. Smith also earned a BBA in accounting from GSU’s College of Business Administration before entering the Army as a chemical officer in 1985.

Currently, he is the deputy inspector general with the Office of the Secretary of the U.S. Army. An experienced military executive, throughout his career he has used his skills in crisis management, finance, and operations to develop and manage the active-duty military in his charge.

Since 2008, Smith has also played an integral role in the development, mentorship, and growth of GSU’s Reserve Officers’ Training Corps (ROTC) programs. He is actively involved, visiting at least once a year, engaging campus leadership, mentoring students, and serving as an advocate for alumni around the world.

In 2010, he became the first chemical officer to command the Army’s premier Chemical, Biological, Radiological, Nuclear, and High Yield Explosives command located in Aberdeen Proving Ground, Maryland. The command had more than 5,000 soldiers and civilians in 17 states on 19 installations and in three to five countries depending on the operational mission. There, Smith helped the organization uncover its identity and provided it with a purpose, all while preparing soldiers deploy to Iraq and Afghanistan.

In 2013, the Army selected Smith to command the Maneuver Support Center of Excellence, in Fort Leonard Wood, Missouri. He became the first chemical officer to command an organization composed of more than 35,000 joint service members with a total of over 99,000 associated family members and support personnel. He was responsible for the training, readiness, and oversight of all of them. To tackle that challenge, he developed a campaign focused on team development through combined sporting events and strategic partnerships with University of Missouri-Rolla, University of Missouri-Springfield, the St. Louis Cardinals, St. Louis Rams, and the Springfield Cardinals. Training emphasized the team over the individual and reestablishing rapport with the surrounding communities.

Smith’s impressive service record has earned him the expert parachutists’ badge, the Distinguished Service Cross, the Bronze Star with an oak-leaf cluster, and the Army Commendation Medal with oak-leaf cluster.