Education in a Country at War

Article
Tuesday, April 26, 2022
By AACSB Staff
Photo by iStock/Silent_GOS
How the Kyiv School of Economics is supporting its students and planning for the future in the wake of the Russian invasion.

For a country in the middle of a war zone, the priorities are safety, food, and medical aid. But there’s also the need to look toward the future, when the fighting will end and the country will need to rebuild. How can a university protect its students in the perilous present and still prepare them for a more hopeful tomorrow?

That’s one of the questions facing the Kyiv School of Economics (KSE) in the Ukraine, which has been under full-scale attack from Russian forces since February 24. The assault was an escalation of the Russo-Ukrainian War, which began in 2014. In the two months since the February invasion, thousands of Ukrainian civilians have died and millions have become refugees.

Recently, Valentyna Sakhno, acting head of KSE Graduate Business School, communicated with AACSB Insights to describe of the school’s experiences. Below she shares observations on how the school has prepared for war, maintained safety for students and staff, and kept its focus on education—and the future. 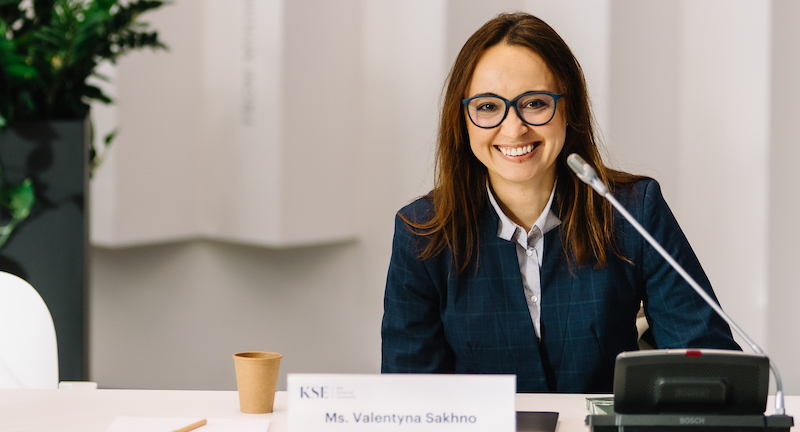 On Preparing for War

In Ukraine, the war with Russia has been going on for eight years. At KSE, our educational process has always taken into account the presence of hostilities and the need to adapt training. When we analyze investments and launch business projects, we always include the factor of war in the agenda. In addition, within the entrepreneurship program, KSE has organized and conducted a training project for veterans of Joint Forces Operations.

Even so, it was difficult for us to prepare for the actual invasion. There were no examples showing Ukraine how to act in such a situation, because no business school in the world has encountered such a set of threats—physical, psychological, and economic—as well as threats to state sovereignty.

One of our MBA students, Vitalii Yumashev, put it this way: “I did not believe in a full-scale war until it happened. Even early after February 24th, it was hard to say, ‘We are at war,’ as if saying it out loud would make this war more real. It took some time to realize that this is our new normal and we must learn how to live with it.”

However, two years of COVID-19 taught us to transform the educational process online in the shortest possible time. While both students and teachers were ready to quickly adopt this format for classes, excessive stress and uncertainty will impact mental space for further learning.

Both the university and KSE have relentlessly followed the recommendations of the state government. In addition, we have taken specific actions to ensure physical safety. Roman Basalyha, the COO of KSE, says, “We have set up a storage shelter with the necessary amount of water and food. We also have purchased autonomous power supply units and first aid kits.”

At this time, all of our students are at the level of personal security they have chosen as optimal. Some of them moved with their families to Europe or the U.S. Others remained in the safe regions of Ukraine. Still others are fighting for the future of Ukraine with weapons in their hands.

The new course Leader at War is one of our more relevant offerings. In it, guest presenters discuss their military experience and relate it to business contexts.

As MBA student Svitlana Zavalina notes, “Men from the MBA group are very involved in the Armed Forces and the Territorial Defense, and at the same time they are continuing their education. The process of accepting the new reality has already taken place.”

Other students have organized an internal volunteering network responsible for fundraising money to purchase bulletproof vests, helmets, aid kits, and drugs. They also have handled the logistics of transferring these items.

On Maintaining a Focus on Education

For two weeks we accepted a new reality. After that, the KSE business school team met with each group of students to learn their conditions and intentions and to determine the study schedule and courses they would like to take.

Currently, the new course Leader at War is one of our more relevant offerings. In it, guest presenters discuss their military experience and relate it to business contexts. The video is presented in English with Ukrainian subtitles.

We are very proud that both teachers and students have found opportunities to resume their studies. Since March 22, two groups of students have studied twice a week for an hour and a half. As MBA student Vira Zinkevych notes, “The vast majority of our team stayed in Kyiv, and from time to time they hold joint meetings and calls. This adds a certain unity so that we do not forget our goals.”

We also have launched a few new projects based on the expertise of KSE faculty. These projects focus on the needs of business and society in Ukraine and have been created in deep cooperation with the Ministry of Digital Transformation, the Ministry of Economics, and municipal governments.

At this time, the KSE Graduate Busines School, like all of KSE, is building its activities on the goal of an immediate victory for Ukraine.

Authors
AACSB Staff
Article Tags
advertisement
advertisement
Advertise With Us
Subscribe to LINK, AACSB's weekly newsletter!
AACSB LINK—Leading Insights, News, and Knowledge—is an email newsletter that brings members and subscribers the newest, most relevant information in global business education.
Insights You Might Like
Making Education Accessible for All
Students at Georgetown McDonough advocate for more accommodations for those with short- and long-term disabilities.