Embracing the Complexity of DEI

Article
Wednesday, December 15, 2021
By Cameron Harris, Brett Josephson, Benjamin Kessler, Christine Landoll
Photo by iStock/Anchiy
How can business schools train the most effective DEI leaders? By teaching them to be vulnerable, empathetic, and open to different perspectives.

Diversity has been on the agenda at business schools and in businesses for more than two decades. But while organizations have made progress, achieving true diversity remains a steep hill to climb. Without universally accepted best practices for increasing and measuring diversity, each institution has been left to its own devices. More recently, organizations have realized that they cannot embed diversity in their cultures without also adopting equity and inclusion as core values. This realization has made their journeys even more complex and challenging.

Embracing all three core values—diversity, equity, and inclusion (DEI)—has implications that go far beyond achieving diverse representation in an institution’s community. A DEI framework compels academic administrators and business leaders not only to track diversity metrics, but also to adopt much-needed cultural change.

This is a daunting task for leaders, whether they work in academic or business settings. That’s why the George Mason University School of Business in Fairfax County, Virginia, created its new Chief DEI Officer certification program. Launched in October, this program represents our school’s commitment to train the next generation of diversity officers and help promote DEI in organizations.

Delivered in a hybrid format, the five-month DEI officer certification program covers topics such as communication, innovation, and relational leadership. Participants engage with a range of DEI strategies, including ways to involve stakeholders in the process, overcome conscious and unconscious biases, and set the right tone from the top—with the aim of creating a sustainable culture shift.

Vulnerability. DEI conversations work best when all participants recognize that humanity is inherently flawed. There is no better way to promote that recognition than for DEI leaders themselves to openly share real-life instances of their own fallibility.

Something special occurs, for example, when faculty members or department chairs admit that they sometimes forget to use gender-inclusive pronouns, so they ask others to correct them when that happens. Such actions do not just encourage more widespread adoption of inclusive practices; they also demonstrate that DEI is about collective evolution rather than individual perfection. It is about offering grace to others, acknowledging that we will not always get it right, and staying accountable to ensure we keep moving forward.

Empathy. Those of a certain age will remember being taught the “golden rule” as children: Treat others as you would like to be treated. However, in highly diverse environments such as those often found in higher education, one can’t assume one’s own ethical preferences apply to everyone. When people from vastly different backgrounds come together, they have a higher potential for misunderstanding each other. They can easily misread others’ motives and perceive slights when none are intended. False assumptions can turn disagreements into hurtful, emotional conflicts.

DEI is about collective evolution rather than individual perfection. It is about offering grace to others, acknowledging that we will not always get it right, and staying accountable to ensure we keep moving forward.

The purpose of DEI is not to compel people to agree on everything. But, at the very least, DEI leaders should encourage everyone in their organizations to engage others with compassion; take the time to consider what they do and do not know; demonstrate growth mindsets; and, in the absence of perfect knowledge, give one another the benefit of the doubt. Ideally, effective DEI leaders also should use empathy to ask questions that help everyone gain new insights into one another.

Holistic understanding. As DEI officers establish cultures where vulnerability (the recognition of flawed humanity) and empathy (compassionate engagement with the other’s humanity) are the norm, they should also cultivate an awareness that we live in a complicated world. They should help people understand that truth often emerges not in black and white but as shades of grey. When people are aware of this complex context, they can think in terms not of “either/or” but of “both/and.” They can create more space for authenticity as they see that “my truth” and “your truth” might each have value.

Needless to say, “facts” and “truth” are not the same. Data and evidence, which often are open to starkly divergent interpretations, don’t necessarily move minds and hearts. But when mutual respect and good faith are present, the factual record can sometimes help elevate the discourse.

As an example, many universities in the Southern U.S. are currently facing pressure regarding brand names, affiliations, and statues on their campuses that link back to their historical roots. That’s especially true in the Commonwealth of Virginia, where many colleges and universities are being asked to face their own precarious histories linked to slavery. They are experiencing cognitive dissonance as they struggle to reconcile the juxtaposition between their founders’ ideals and real-life behaviors.

Our own university is named after George Mason, who is considered “a forgotten Founding Father” of the United States. Mason was influential in the writing of the U.S. Bill of Rights, and he also was Northern Virginia’s second-largest slaveholder. Instead of ignoring this history or trying to escape it through a name change, Mason’s leadership decided to embrace the complex truth of its namesake by honoring both the ideals that George Mason represented and the men and women he enslaved.

The memorial to the Enslaved Peoples of George Mason now stands at the center of our campus. Installed in 2021, it includes details about slaves such as Penny, a child gifted to one of Mason's daughters. The resonance of the memorial’s message is captured in a note that a Mason student left at the site: “Dear George, I will take the degree/education you did not want Penny to have.” As George Mason University’s president, Gregory Washington, writes in an op-ed for NBC News, “By holding up the reality of George Mason’s experience rather than tossing it away, we can step into the complexity of the deeply uncomfortable truth he represents.” 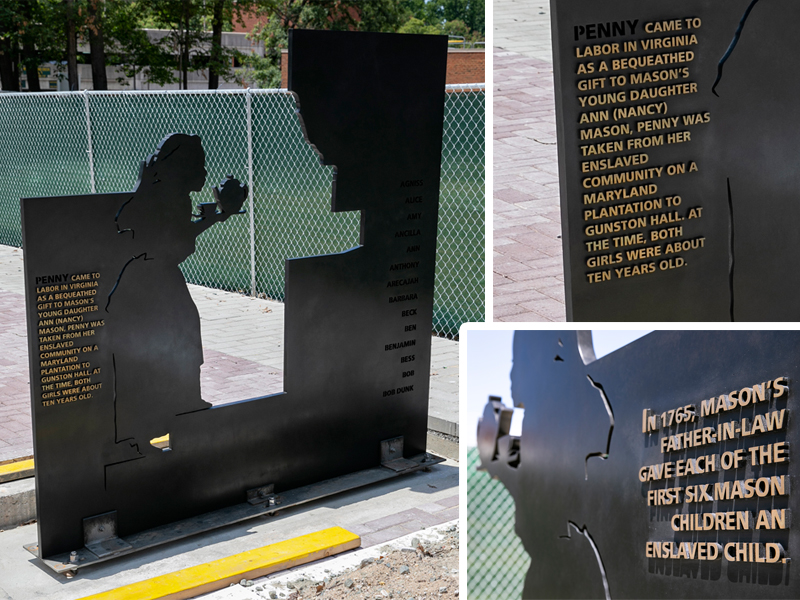 George Mason University erected this memorial to the Enslaved Peoples of George Mason in 2021 as a way both to honor the slaves owned by the university’s namesake and to reconcile Mason’s ideals with the “uncomfortable truth” of his real-life behaviors. (Photos by Shelby Burgess/Strategic Communications/George Mason University)

Unconventional leadership. The most transformative part of DEI naturally involves leadership. Leaders are responsible for setting the tone and putting policies in place that make room for the three elements mentioned above.

An extensive body of management research highlights the benefits of voice safety and psychological safety. Researchers find that organizations perform better when people are comfortable voicing opinions that don’t fit the norm. That’s how some of the best ideas come to light, after all.

Leaders have compelling incentives to cultivate authentic conversations, related not only to DEI but also to other areas important to their organizations. DEI officers must create and encourage environments where equity and inclusion become the standard, so that people from historically marginalized identities feel safe enough to make their voices heard.

Another message we deliver through our certificate program is that there is more to DEI leadership than simply following best practices. DEI officers perform best when they themselves have been exposed to diverse experiences and perspectives, so that they do not fall prey to groupthink.

That’s why most sessions of our program are co-taught by an academic and a practitioner. Additionally, many faculty members in the Business Foundations unit—which is devoted to undergraduate courses on core business topics—do not fit the mold of research-active scholar-teachers. Some are former executives, while others joined our business faculty after receiving advanced degrees in other academic disciplines, such as political science, English, or law. They bring fresh perspectives and real-world credibility to this certificate program and to our curriculum as a whole.

In our initial run of the certificate program, the opening sessions demonstrated the difficulties today’s organizations face in trying to hold space for diverse voices. For example, one participant told us that the organization where she works employs both staunch supporters of Black Lives Matter, a movement to protest police brutality, and fervent proponents of Blue Lives Matter, a countermovement advocating for police officers and their families.

These are not mutually exclusive positions—one can be deeply concerned about both the violence disproportionately inflicted upon people of color and the risks and dangers faced by law enforcement officers. But in today’s climate, the two positions are often placed in opposition to each other, which makes it challenging to craft messaging and promote cultures that respect both perspectives.

These fraught issues and heated debates elude easy answers. At Mason, we emphasize exploratory tools and approaches, all rooted in the above-noted four elements, that DEI officers can learn from, emulate, and hopefully share with their organizations. Moreover, we strive to always practice what we preach.

We cultivate an atmosphere where people of different mindsets can engage one another authentically and respectfully. Disparate and novel perspectives are not only tolerated, but welcomed.

At George Mason University, we have worked to cultivate an atmosphere where people of different mindsets, backgrounds, and orientations can engage one another authentically and respectfully; on our campus, disparate and novel perspectives are not only tolerated, but welcomed. For example, Mason is home to both the Scalia School of Law, named for the conservative late Supreme Court Justice, and the Carter School for Peace and Conflict Resolution, named after the liberal U.S. president.

Washington, our university’s president, likens education to a lifeboat from which no one should be excluded. He also describes Mason’s mission as bringing people “to point B, no matter where their point A may be.” These inclusive values stand in contrast to the echo-chamber discourse that is unfortunately on the rise in our increasingly polarized society.

George Mason University places a priority on building a diverse campus community, but like most higher education institutions, GMU still has ample room to learn and grow where DEI is concerned. At the George Mason University School of Business, under the leadership of our dean Maury Peiperl, the next phase of DEI evolution has begun. We must decide to make business schools places where students, faculty, staff, and scholars can truly feel welcome and grow together, regardless of their identities and histories. If that is our objective, we must start by training leaders and educators to foster more inclusive organizations wherever they go.

Article
December 7, 2022
The Multigenerational Workforce
With five generations now in the workforce, how can business leaders take advantage of each generation's unique strengths for the benefit of all?

Video
Time for Educators to Lead on Societal Impact
Businesses are under pressure to stop focusing on profit maximization and embrace societal impact instead. Business educators have a key role to play.