Article
Wednesday, November 11, 2020
By Elliot Davis
Photo by iStock
How have business school enrollments fared in the most recent term? We compare predictions made in May with new survey data to show the pandemic's impact.

Since the outbreak of the pandemic, many business education leaders have been predicting the impact COVID-19 will have on our industry. In an AACSB survey conducted in May, business educators were widely preparing to deliver their programming virtually, with 87 percent of respondents indicating that they were preparing to offer a mix of virtual and in-person learning. With many business schools’ fall terms having begun by mid-September, we are now able to look at how these schools delivered their learning experiences, and what the relative impact was on their enrollment.

A survey conducted in mid-October asked the heads of business schools to report, for their most recent terms starting from July through September, their school’s method of delivery for courses, how their enrollment had changed from the same term in the prior year, as well as their balance of international and domestic enrollment. A total of 316 institutions participated in this quick-take survey, representing 52 countries (186 in the Americas; 84 in Europe, the Middle East, and Africa (EMEA); and 46 in Asia Pacific).

That said, in the recent survey most schools did end up delivering their coursework with some degree of both online and face-to-face elements: 87 percent of undergraduate courses and 86 percent of master’s courses that were delivered primarily face to face last year are now being delivered at least partially online. 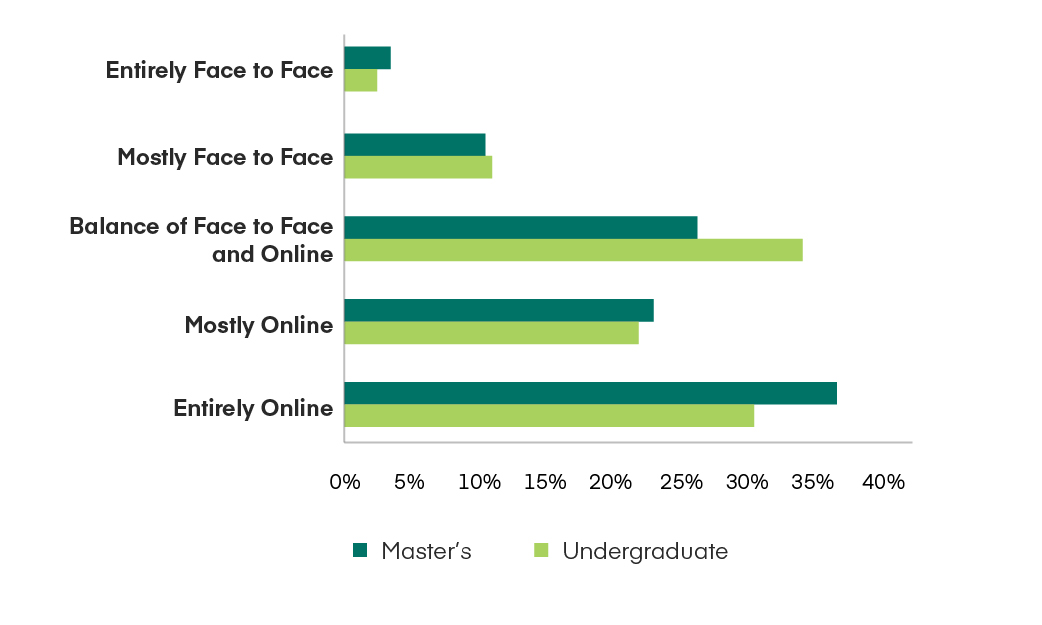 This chart details shifts from courses that were primarily offered face to face pre-COVID, showing that only a small percentage remained face to face a year later, with the majority shifting to some reliance on online delivery.

Looking at schools that opted to deliver their courses entirely online, schools in the Americas did so at highest rate for master’s programs (41 percent), nearly doubling the rate for master's courses in EMEA (27 percent). It is worth noting that the United States schools comprised most of the respondents for the Americas (with 167 out of 186 total responses in this region). For undergraduate courses, schools in EMEA and the Americas (at 29 percent and 33 percent respectively) delivered entirely online education more often than in Asia Pacific (20 percent).

In May, we asked schools to predict how their enrollment would change across all program levels for their upcoming term, and 46 percent of responding schools expected a decrease. Only 13 percent of schools believed they would see an enrollment increase.

The results from our October survey show that business schools have largely exceeded those enrollment expectations, with 82 percent of undergraduate programs and 77 percent of master's programs experiencing either an increase or no change from the prior year.

Chart 3. Percentage change in enrollment from prior year 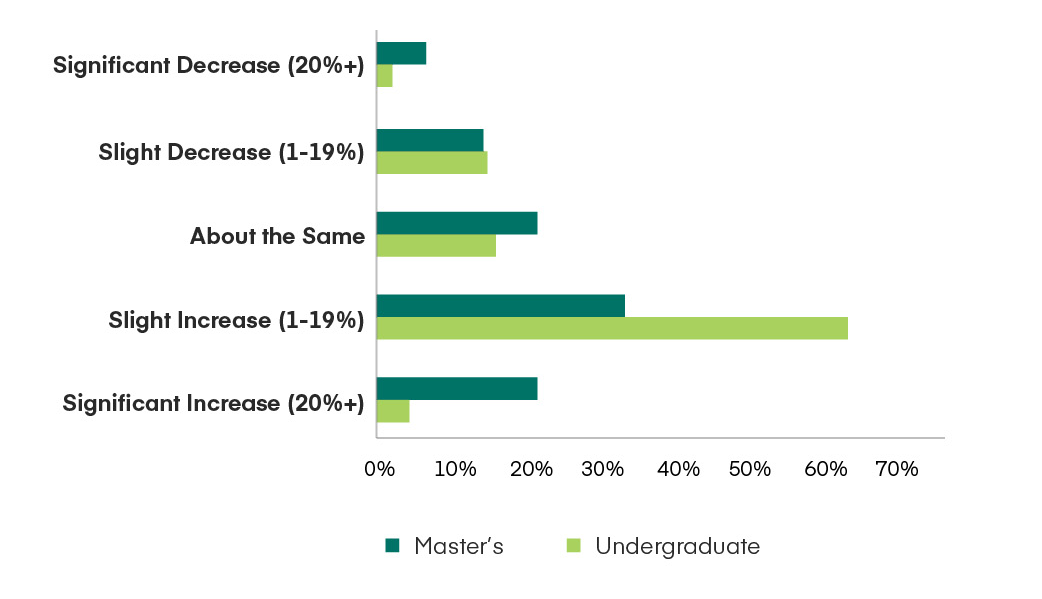 Looking at undergraduate programs specifically, we found the greatest percentage of schools reporting an enrollment increase are in EMEA. Eighty-two percent of undergraduate programs in EMEA reported an increase (of any amount) in enrollment, as opposed to 65 percent in the Americas and 71 percent in Asia Pacific. Though many schools reported increases in enrollment, these increases were fairly small. Across all regions, 53 percent of reported increases were between 1 and 4 percent, and 65 percent were between 1 and 19 percent.

Overall, the enrollment turnouts have been encouraging. Compared to earlier forecasts of how business schools would fare in attracting students, the survey results show a more positive picture.

In 2008, with uncertain job markets in many countries due to the recession, business schools performed well in terms of enrollment, with many learners opting to pursue a business education to upskill and help ensure their ability to be hired, or delaying entrance into the workforce until the job market became more certain. Similar responses may be occurring with COVID, as businesses freeze hiring due to uncertain conditions, sending prospective employees back to school. The increase in availability of online education may also have increased access for some students to gain a business degree, when geographic constraints may have previously kept the pursuit out of reach.

In a future article, we will examine the impact that international travel and recruitment may have had on these enrollment changes.

Article
October 4, 2022
Open Access and the Role of the University
A new U.S. policy requires federally funded research to be freely accessible. How will this affect the way research is published and consumed?