A Model for Analyzing Sustainable Development

Organizations focused on sustainability are attempting to create a global framework for economic growth that protects the fundamental pillars of humanity and the planet. It is a cause I have dedicated much of my professional career to achieving.

I was a consultant for driving awareness of the United Nations' Sustainable Development Goals, which are designed to encourage development in an inclusive way that leaves no one behind. I have consulted with the Africa Centre in Rwanda and on the Global Agenda Council for the World Economic Forum. I also have served with organizations such as the National Competitiveness Council of Nigeria and the Initiative for Global Development.

Through these activities—and a recent interview with Nobel Laureate Paul Romer, the former chief economist at the World Bank—I have come to identify what I call the Five Forces Model for Analyzing Sustainable Development. Like Michael Porter’s famous five forces of competition, these factors interact with each other and provide a straightforward way of looking at a complex situation. 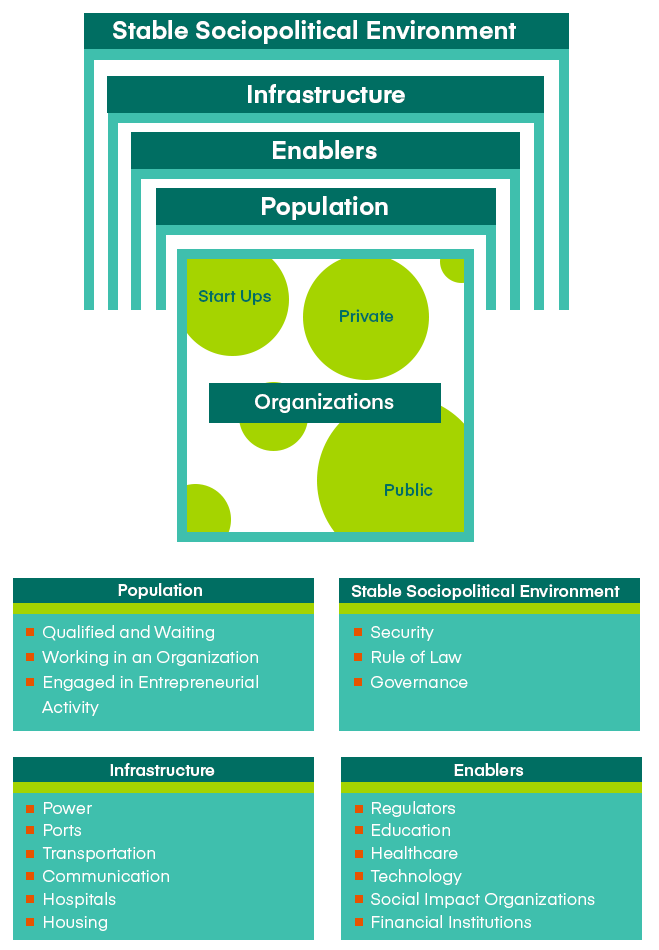 Here, I’ll take a closer look at each one: organizations, populations, enablers, infrastructure, and the sociopolitical environment. While many of my examples come from Nigeria and other parts of Africa, the lessons are applicable worldwide.

Government alone cannot supply all jobs or shoulder the entire economy. Therefore, some of the work must be done by organizations—whether public, private, startup, or nongovernmental.

In Nigeria, for example, government spending accounted for 5.7 percent of the gross domestic product in 2019—which means that nongovernmental economic activity accounted for almost 95 percent of the total. Among economies within the Organisation for Economic Co-operation and Development (OECD), business activity accounts for 72 percent of GDP. Money flows into the economy from labor income, capital income, taxes, investment in capital assets, and payments to suppliers.

In many economies, 80 percent of the jobs are provided by entrepreneurs. These entrepreneurs are responsible for most of the advances in new products and processes, provide most of the employment opportunities, and represent a key indicator of the overall performance of an economy.

In Nigeria, only about 161 companies are listed on the stock exchange. But in 2019, there were 41.5 million micro, small, and medium enterprises (MSMEs), according to the National Bureau of Statistics of Nigeria. Just imagine the scale of jobs that could be created if each of these businesses was empowered to employ just one additional person.

In the past, society was split between the haves and have-nots. But today, society is divided into those who are included and those who are left behind.

This inequality is more significant in emerging markets, where 80 percent of the world’s people reside. According to the National Bureau of Statistics, in 2020, the unemployment rate in Nigeria was 58.3 percent for people between the ages of 15 and 24. Research has shown that when youth unemployment is high, many people will turn to criminal activities to support themselves.

In the past, society was split between the haves and have-nots. But today, society is divided into those who are included and those who are left behind.

Meanwhile, it is estimated that by 2050, Africa’s population will double, reaching 2.5 billion people—just about the current combined population of India and China. What is more worrisome is that while Nigeria’s population grew at a rate of 2.6 percent in 2019, the GDP growth rate was 2.2 percent, according to the World Bank, which could result in negative per capita GDP growth. If Nigeria cannot create a credible plan for sustainable employment for its population, this situation could be a ticking bomb.

Enablers are institutions and mechanisms that remove economic blockages and open economic arteries. For instance, education systems ensure that graduates of universities and secondary institutions have the skills that make them employable. Healthcare systems ensure that citizens are healthy enough to work. COVID-19 showed us how fragile some of our sovereign healthcare systems are—and how much the economy suffers when the population is sick.

Among the most critical enablers are regulators, which tend to act either as sources of support or headwinds against progress. If societies are to prosper, regulators should not constrict the pursuit of opportunity or act in a way that entrenches protectionism.

Again, Nigeria serves as an example. One of the world’s fastest-growing technology markets, the country attracted more than 216 million USD in the first quarter of 2021 alone. However, its tech startups face a number of regulatory obstacles, ranging from the Central Bank of Nigeria’s ban on cryptocurrency trading to the Security and Exchange Commission’s restrictions on technology platforms that allow individuals to purchase shares in foreign companies. These obstacles have stifled entrepreneurial activity in Nigeria’s tech sector.

But the most significant enablers of modern times have been technology platforms, which have heralded an era of extraordinary inclusiveness. In the area of financial services, these platforms have created jobs and made banking accessible. Applications such as M-Pesa, a popular mobile-phone-based money transfer system, have spread across Africa; today mobile money services generate 6.7 percent of Africa’s GDP.

Technology platforms also have boosted the impact of education, particularly through massive open online courses that reach high numbers of learners. In 2018, the research firm Research and Markets predicted that, by 2025, the global e-learning market will be valued at 325 billion USD.

Infrastructure encompasses the facilities needed for the operation of a society, including power, ports, transportation, communication, and housing. Another piece of infrastructure, broadband internet service, has now become imperative, particularly now that COVID-19 has driven a surge in digital transformation. A poorly functioning infrastructure will severely constrict the smooth production and delivery of goods and services.

By 2050, the infrastructure needed for 2.5 billion Africans will be unprecedented in the history of humankind. Residents will require 700 million housing units, 300,000 schools, and 100,000 health centers. They will need a network of rail or underground transportation similar to the underground tube system in the U.K., which that country took more than 150 years to perfect.

Moreover, almost half of people living in Sub-Saharan Africa still lack access to electricity. Given that African countries have a long way to go in a relatively short period of time, we can only imagine the impact that entrepreneurship could have on accelerating the infrastructure-building process.

A stable sociopolitical environment attracts capital for rapid and sustainable economic development. But while most of us think of capital in terms of what is produced or built, the sum of a country’s machinery, equipment, structures, and urban land does not reveal that nation’s level of income. Intangible sources—such as the public trust, an efficient judicial system, clear property rights, and effective government—also boost productivity and build wealth.

A stable sociopolitical environment attracts capital for rapid and sustainable economic development. Therefore, the rule of law is paramount for a stable polity.

Therefore, the rule of law is paramount for a stable polity. Developed countries apply their laws without regard to status, tribe, or creed—indeed, they often hold their leaders to a higher standard of accountability. By contrast, many low-income countries are subject to rampant corruption that subverts the rule of law, destroys intangible capital, and renders those countries poorer.

The World Bank estimates that the rule of law explains 57 percent of a country’s intangible capital, compared to just 36 percent for education. Wealthy countries are those where the majority of people display ethics, integrity, responsibility, punctuality, respect for the rule of law, pride in their work, the will to save and invest, and the will to be productive.

Sustainability Issues in the Classroom

Whether business professors use my sustainability model or some other resource, I believe they need to help students understand the factors that a society needs to function optimally. One way they might explore the issue is by asking students from different nations to talk about which of the five forces are most important in their home countries and which areas could use the most work. Students could discuss the variations between countries, determine where imbalances exist, and offer ideas about how problems could be fixed.

Professors also could have students debate examples of innovation and regulation. For instance, they could look at Airbnb, which originally disrupted the hotel business by allowing homeowners to rent out extra rooms. But today, in communities like New York City, speculators are buying properties specifically to offer as Airbnb host sites. This means the speculators are changing the communities where these properties are located; because renters are only in town for holidays or vacations, they do not support hospitals, school systems, and other institutions that create a stable society. Therefore, the new model is harming communities and destroying intangible capital.

Such conversations bring “town and gown” closer together by making sure academics understand the needs of the broader society while preparing students to become productive leaders of their communities.

A Spectrum of Sustainability

It is important for both students and professors to understand that nations are not poor because they lack natural resources or because nature is cruel to them, but because they fail in at least some of the factors that create sustainable development. Too often, poor countries have what is known as a market society—conscience is thrown out, and legal judgments are for sale to the highest bidder.

Russian-American novelist Ayn Rand summed up this situation when she wrote, “when you see that men get richer by graft and by pull than by work, and your laws don’t protect you against them, but protect them against you—when you see corruption being rewarded and honesty becoming a self-sacrifice—you may know that your society is doomed.”

Yury Fedotov, executive director of the United Nations Office on Drugs and Crime, echoes this sentiment. “Corruption represents a major threat to the rule of law and sustainable development the world over. It has a disproportionate, destructive impact on the poor and most vulnerable, but it is also quite simply bad for business.”

The sustainable development of any society depends on where it lies on the spectrum of these critical five forces. Tomorrow’s leaders need to understand how these factors interrelate and how they can have either positive or negative effects on economic progress.

Authors
Austin Okere
Founder, CWG Plc and Ausso Leadership Academy
Article Tags
Advertise With Us
Subscribe to LINK, AACSB's weekly newsletter!
AACSB LINK—Leading Insights, News, and Knowledge—is an email newsletter that brings members and subscribers the newest, most relevant information in global business education.
Insights You Might Like
The Future of Higher Ed Is Stacked
We transformed our graduate programs to tap into the growing pool of students seeking more efficient and affordable ways to pursue higher education.

Article
August 10, 2022
Radical Collaboration
The president of nonprofit Virgin Unite shares the keys to creating powerful partnerships that can solve some of the world’s most pressing problems.

Article
August 2, 2022
Sustainable Leadership: The Rainforest Perspective
Through an immersion in the Amazon ecosystem, students learn the connection between sustainability and leadership.