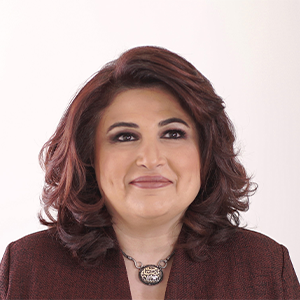 
With a career spanning over three decades, Rana Ghandour Salhab is a senior partner and member of the Executive Committee at Deloitte in the Middle East. She leads the people and purpose strategy across 16 countries and oversees societal and entrepreneurial initiatives that support youth skill-building, social enterprises, and education for refugees and marginalized communities.

Salhab is an advocate of political participation and a vocal champion of economic empowerment and advancement of women into leadership roles in Middle East communities. She leads initiatives, sits on multiple advisory boards, speaks internationally on obstacles that prevent Arab women from being more economically active in the region, and lobbies for amendment of laws and regulations to reach gender parity.

Salhab served on the executive board of the National Commission for Lebanese Women and on the advisory board of Reach, a nonprofit organization designed for mentoring and supporting women in finance. She supports the 30% Club GCC, an initiative aimed at increasing the number of women on corporate boards in Gulf Arab countries, and is a member of a think tank formed to lead and shape the Mentorship Forum Middle East in Bahrain. In 2017, the Financial Times and HERoes placed Salhab at the top of their inaugural Global Champions of Women in Business list, and in the top five worldwide in 2018.

Salhab is a member of the Middle East Advisory Board of the Olayan Business School at the American University of Beirut. She is active in employability and STEM skills-building and entrepreneurship ecosystem initiatives to address the digital and skills gap in the Middle East. For example, she led a 250,000 USD project funded by Deloitte with Junior Achievement—Injaz Al Arab in the Middle East region—to develop a “Be Entrepreneurial” curriculum for underprivileged Arab high school and university students. This program has touched thousands of young people in the region since its launch. Salhab has also headed an accelerator program for social enterprises that includes a competition and support pack of pro bono services, networking opportunities, mentorship, and skills development.

Salhab was the first woman elected to the board of directors of Deloitte in the Middle East and was one of the first at a professional services firm in the region. She was also the first equity partner admitted to the partnership. Since assuming senior leadership positions and being voted in by fellow partners to sit on the Deloitte Middle East Board of Directors, she felt an additional stewardship responsibility toward her female colleagues. She used these achievements to amplify her voice in supporting business leaders, and she has consistently served as a mentor and sponsor of professional men and women, many of whom are in senior leadership positions in her company and in markets in which she works.