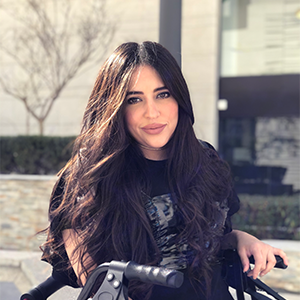 Maryangel Garcia-Ramos is a transformative leader and influential advocate for diversity and inclusion in Mexico. She founded the nonprofit Mexican Women With Disabilities, which has successfully championed reform to secure equal protection for women with disabilities.

Garcia-Ramos has used a wheelchair since she was 14 due to a neurological disorder, marking a transformation that has influenced her life purpose. Considering herself privileged by her access to health services, education, and labor opportunities not so readily available to a majority of people with disabilities in Mexico, she dedicated her considerable leadership talent to advocate for and elevate the rights of people with disabilities and the wider diversity and inclusion agenda in Mexico.

As founder and director of nonprofit Mujeres Mexicanas con Discapacidad, Garcia-Ramos has achieved important reform to advance equality for women with disabilities in Mexico. She has developed labor inclusion and innovation strategies for NGOs and corporations and is a professor in the EGADE Talent+ program. She is also an active member of the Nuevo León Social Development Board and the Citizens’ Commission for Persons with Disabilities.

Through her MBA from EGADE Business School, Garcia-Ramos has strengthened her leadership capacity and expanded her network for innovating, influencing, and impacting change. She uses her education to impact the narrative for cultural transformation and policy change. She also promotes structural change to abolish ableism and fights for gender equality, human rights, and the recognition of human dignity. Garcia-Ramos’ advocacy is about creating platforms to let people tell their own stories to powerfully convey that there is no “one single voice, but a diversity in our abilities, identities, gender, and contexts—that all need to be heard and considered for action.”

Garcia-Ramos is inspiring leaders through her impact. She advocates for each one of the 32 Mexican states to have at least one woman leader with a disability. She is committed to ensuring that policymakers in Mexico devise legislation that creates greater opportunities in education and the labor market for persons with disabilities, and to ensuring systematic collection of data on this population.

Garcia-Ramos has represented Mexico at the U.N. Convention on the Rights of Persons with Disabilities and has reached thousands of future leaders through her TEDx Talks, “The Power of My Story” and “The Revolution of Disability,” and through her keynotes, including “Sex, Beauty, and Women with Disabilities” and “The Disability Story: Diversity in Media,” at SXSW. NPR named her as one of 6 Fearless Women Who Were an Inspiration in 2018, and in 2021, InStyle magaine recognized her as one of the 30 Badass Women in Mexico to follow, and Hulu featured her story in the mini-documentary Acentos Bienvenidos. Garcia-Ramos has also won numerous awards for championing diversity and inclusion, most recently the Premio Incluye and the TEC Mujer Award.