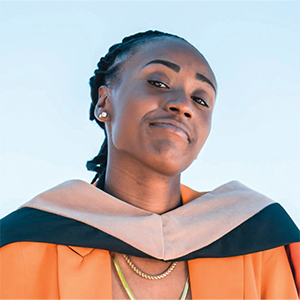 Kelsey Davis knows that talent is everywhere—but opportunity is not. She is determined to change that. Her unique platform connects brands targeting Generation Z audiences with Gen Z creators—particularly those from underrepresented communities—while fostering a diverse and inclusive environment and democratizing the content marketplace for creative individuals, regardless of race, class, location, or resources.

Davis knows firsthand the difficulties faced by underrepresented creative individuals—that they are less likely to receive business loans, inherit family-owned businesses, or have access to the right markets to sell their products, but she also wholeheartedly believes that minority founders can “solve problems for 99 percent of the world,” noting their circumstances often give them a higher sense of empathy and a consciousness of having to go against the grain. She believes that CLLCTVE levels the playing field for those who historically lack opportunity that others may take for granted.

Davis is the first African American to graduate from the MS in Entrepreneurship and Emerging Enterprises Program at Syracuse University’s Martin J. Whitman School of Management. And while she is very pleased to hold that designation, she wants to see others like her have access to the academics, mentoring, and resources of business education.

Davis began CLLCTVE as an undergraduate majoring in television, radio, and film. Her work started to get noticed quickly, and soon she was working with major brands like Puma and Coca-Cola while juggling the demands of earning her degree. Davis calls pursuing her master’s degree an “incubation year,” where she was able to test a lot of assumptions about her company and work on academic projects that directly intersected with her real-life business goals. Just a year after graduating from the master’s program, she has relocated to Los Angeles to further expand the company’s market, built a working team, raised hundreds of thousands of dollars in venture capital, and hosts a true digital community of thousands of creators on her platform.

Davis is a powerhouse with a passion that is apparent from the minute she starts explaining the foundations, growth, and ever-expanding goals of CLLCTVE. She holds to the belief that “God gave [her] the wisdom and purpose to go out and build a bridge and be a connector,” as well as advice from her father, who said, “If you do good work and are a good person, you’ll succeed.” CLLCTVE is well on its way to being a success, but it is Davis herself who is the true inspiration as a role model for today’s young creators looking to succeed at what they do best. Others have taken notice. In 2020, Forbes highlighted her as one of 12 Black-Owned, LGBTQ Entrepreneurs, and in 2021, named her to its 30 Under 30 list. Davis has also been featured in AdWeek and The New York Times.