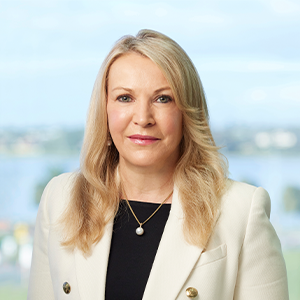 Elizabeth Gaines is the first woman to run a major Australian publicly listed mining company. In 2013, she joined Fortescue Metals Group, the world’s fourth-largest iron ore producer, as its first female board member, then became CFO in early 2017 before being named CEO later in 2018. She is a highly experienced business leader with international expertise and a proven track record in financial and operational leadership across a number of industries.

Gaines was born in Western Australia’s remote Kimberley, a region with a predominantly Indigenous population, where poverty and disadvantage remains all too common. Gaines recalls of her school years, “In most of my classes, I was probably the only non-Aboriginal child—as well as the daughter of the headmaster,” she says with a smile. “The importance of education and integration has stayed with me,” and this is evident in the way she leads and inspires future business leaders.

Gaines remains a champion of diversity and inclusion in the Australian resources sector by focusing on leadership development, retaining female and Indigenous talent, and providing balance and flexibility in the workplace. She believes the best results come from a diverse workforce that is supported and encouraged to reach its full potential. She asserts that embracing diversity is proven to drive better company performance.

“Encouraging diversity is not just the right thing to do, it is the smart thing to do; change must be led by a renewed focus on diversity. At Fortescue, over 25 percent of our management team is female, and we are proud to be one of only two major ASX-listed companies in Australia with greater than 50 percent female board members,” she said. Gaines attests, “We embrace diversity in all its forms, and we are proud to be one of Australia’s biggest employers of Aboriginal people.” She says that diversity has been integral to Fortescue becoming the No. 1 ranking stock on the S&P ASX 100 index, with total shareholder returns of 266 percent over the past three years.

Gaines credits her successful navigation of COVID-19-related operating challenges to her compassionate leadership style. Since the outbreak of the virus, the company has sent more than one million text messages offering words of support or information on COVID-19 management measures to employees and stakeholders.

Situations like the pandemic demand a different kind of approach to the tough and no-nonsense leadership style traditionally epitomized by male chief executives. Compassion and honest communication are more effective when uncertainty abounds amid a health crisis, according to Gaines. She believes that female leaders have been able to positively respond to change and make tough decisions with empathy and decisiveness.