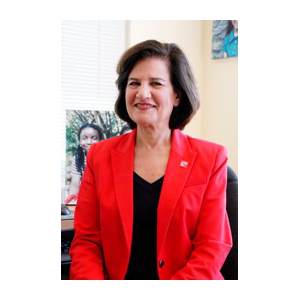 Mentoring and caring for others is a way of life for Judith Vredenburgh. It’s what she believes in and what she loves. Vredenburgh spent the first 20 years of her career in corporate America, including as CEO at Chess King. As she climbed the career ladder, her vision was to one day apply her leadership skills to benefit a nonprofit company.

In 1978, Vredenburgh’s daughter was born prematurely, weighing only three pounds. Her child’s successful treatment in a neonatal ICU further fueled Vredenburgh’s dream of working for an organization whose mission was to serve others. She began by sharing her business and leadership skills as a senior executive at the March of Dimes Birth Defects Foundation and then as CEO of Big Brothers Big Sisters of America for 10 years.

Today she is president and CEO of Girls Inc., leading the organization to provide life-changing experiences and solutions to the unique challenges facing more than 140,000 girls across the U.S. and Canada. She and her team spend their time “inspiring all girls to be strong, smart, and bold.”

When Judith Vredenburgh joined the March of Dimes in 1993, revenues had been declining. Applying her seemingly boundless energy and business acumen, Vredenburgh steered the organization from financial stagnancy to fiscal success. By 1999, the March of Dimes had seen a 50 percent revenue increase, from 121 million USD to 183 million USD. “We built the strategy and infrastructure to sustain this growth,” Vredenburgh said in a 2001 interview with UB Today.

As the first female president and chief executive officer in the 105-year history of Big Brothers and Big Sisters, Vredenburgh built an impressive legacy. According to a 2009 Philadelphia Inquirer story, she more than doubled the number of at-risk children served by the organization each year and increased annual revenue by 70 percent. She boosted the percentage of African-Americans and Hispanics among “bigs” (adult mentors) and “littles” (five- to 18-year-olds). In 2002, she made a place at the table for gay mentors, a move that triggered 16,000 angry emails in the first 24 hours. She hung tough, courageously doing what she thought was right.

Under her leadership, a five-year strategic plan is now invigorating the network of Girls Inc. affiliates to grow the level of services offered to girls, increase revenue, and institute a participant tracking system and outcomes measurement for each girl served.