The Making of a Mission-Driven Mascot

Article
Wednesday, September 8, 2021
By Tricia Bisoux
Leon, the SKAMELEON, the student-designed mascot for SKEMA Business School. Satellite campus, North Carolina.
SKEMA Business School asked its students to design an engaging new mascot that would represent its brand and reflect the spirit of its global community.

After more than a year filled with disheartening news stemming from the pandemic, the story of an imaginary curious chameleon named Leon might seem somewhat frivolous. But for SKEMA Business School, its new mascot is fulfilling an important purpose—helping the school bring together its students around the world at a time when human connection is more important than ever before.

In 2019, just before the term COVID-19 entered the global lexicon, SKEMA launched its “SKEMASCOT” contest, in which it asked students to imagine a mascot that would represent its brand and mission, as well as embody the “SKEMA student spirit.” Thirty-five student teams submitted their ideas. Then, a panel of judges, who included school administrators and members of student associations, selected a winner.

“Our motto is ‘At Home Worldwide,’ and we are a glocal school: We are global with campuses around the world, but embrace a local approach in which we adapt to each local environment,” says Damien Roux, SKEMA’s global marketing and communications director. “We wanted our students to create a unique mascot that would make sense on all seven of our campuses in France, China, Brazil, South Africa, and the United States.”

'Friendly, Curious, and Eager to Learn’

The winning mascot, “Leon, the SKAMELEON,” was conceived by students Roxane Ricros, who earned her master’s in management this year, and Arthur Cavrois-Foucaut, who spent four years at SKEMA taking preparatory business courses. The pair believe that their design was chosen because the attributes of a chameleon represent SKEMA’s values so well.

“The idea of the chameleon came to us [because the animal is] known for changing colors according to its environment and can adapt to basically any situation,” says Ricros in a video explaining the character’s origins. “We wanted something both original and endearing. … Leon is friendly, he’s curious, and he’s eager to learn and discover new things.”


SKEMA worked with a design agency to create a digital version of its new mascot to appear on social media, as well as in videos such as this short clip that depicts Leon’s discovery of landmarks representing the countries where the school has campuses.

After Leon was selected as the school’s mascot, Ricros and Cavrois-Foucaut worked closely with SKEMA’s marketing and communications office, as well as a design agency specializing in 3D renderings. Together, the team developed Leon as both a digital version that can be used in video and on social media and as a costume to be used for live appearances.

SKEMA had planned to unveil Leon in early 2020. But when the pandemic struck, those plans were delayed to mid-year. At that time, SKEMA introduced Leon publicly on its website and via its social media channels. The school has made several digital versions of Leon available for students to use, so that they can include the mascot’s likeness in posts on their own social media accounts. Students also can use the costume if they want Leon to be a part of any of their own events.

The live version of the mascot made its debut at the start of the fall 2020 semester on SKEMA’s newly opened Paris campus, as the school welcomed the first students to its new location. In February 2021, the live mascot also appeared at the school's campus in Suzhou, China, during a celebration of the Chinese New Year. There, the school sent out a post over WeChat featuring a welcome message from Leon, and his likeness was used to adorn red envelopes that were sent to members of the school’s community in honor of the new year.

The chameleon is “known for changing colors according to its environment and can adapt to basically any situation.” — Roxane Ricros, mascot co-designer

In choosing and refining the mascot’s likeness and demeanor, the marketing team had to take into close consideration the different cultural contexts of the five countries where the school’s campuses are located. “The concept of a mascot is perceived in very different ways depending on the local culture,” says Roux. “We adapted our approach and introduction of the mascot accordingly.”

For example, Roux explains, mascots are extremely rare in France. For that reason, the school carefully explained to its French students the purpose of having a mascot and the reasoning behind choosing a chameleon to represent the school. In China, however, where mascots are common, Leon’s introduction was warmly welcomed with little prior explanation required. 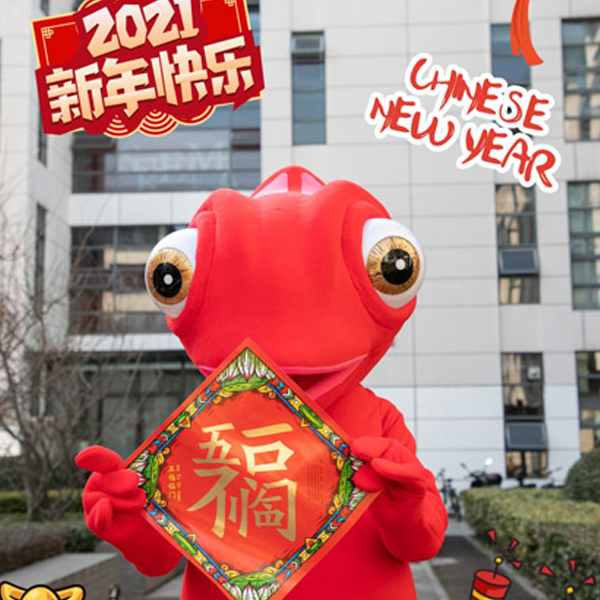 Leon at a celebration of the Chinese New Year on SKEMA's campus in Suzhou.

So far, Leon has been part of local celebrations of Halloween and Christmas, in addition to the Chinese New Year. In late March of this year, the character made an appearance on SKEMA’s campus in Raleigh, North Carolina, during Student Appreciation Day, where he played football and danced with students. SKEMA also created a video featuring Leon in honor of this year’s graduates, released the first week of May.

David Mbodj, a student on the Raleigh campus, was the first to wear the costume during Student Appreciation Day. He explains that when he first heard that SKEMA was unveiling an animal-based mascot, he thought it would be along the lines of “wild animals like lions and wolves,” which are typical mascots for schools in the U.S. Such mascots usually serve only to represent a school’s sports teams, he notes, but “our friendly SKAMELEON ... truly describes the school’s values and mission.”

Part of the new mascot’s success, says Roux, is the fact that it was designed by students, for students. “To ensure that the campaign was effective, it has been essential to involve students from the very beginning,” he says. “They now contribute to its deployment, primarily through social media and events.”

SKEMA’s marketing and communications team plans to integrate the mascot into the school’s global outreach strategy by ensuring Leon is ever-present on all campuses. “We will launch new physical mascots this year on our two other campuses in Belo Horizonte, Brazil, and Cape Town, South Africa. We will also continue to create 3D videos of Leon’s many adventures.”

As the school continues to refine its use of Leon, the biggest challenge will be “to ensure that he fulfills his purpose of representing our schools and students, especially through life’s biggest events and celebrations,” says Roux. “Due to the pandemic, the mascot has not been as present in-person as it could be, but it has remained alive online through evergreen content and videos. Leon goes on many adventures and adapts to the local context of each campus.”

Authors
Tricia Bisoux
Editor, AACSB Insights
Article Tags
advertisement
advertisement
Advertise With Us
Subscribe to LINK, AACSB's weekly newsletter!
AACSB LINK—Leading Insights, News, and Knowledge—is an email newsletter that brings members and subscribers the newest, most relevant information in global business education.
Insights You Might Like
Making Education Accessible for All
Students at Georgetown McDonough advocate for more accommodations for those with short- and long-term disabilities.